Time Magazine reports, "‘We’re Still Not Free.’ A Descendant of the 1921 Tulsa Massacre on the Pain of Trump's Juneteenth Weekend Rally"

I remember playing as a little girl with my brothers on the playground at the historic Vernon A.M.E. Church, one of the few structures to survive from the 1921 Tulsa Race Massacre. My mom and dad went to music workshops at the church and we would play outside not knowing that we were playing on sacred, blood-stained ground.

My great-grandmother Rebecca Brown Crutcher lived in the Greenwood community. She and her family had a barbecue joint right in the heart of the business district that we call “Black Wall Street.” The entire community was self-sufficient and wealthy — the picture of Black excellence.

But in 1921, my great-grandmother fled in fear of her life because white people burned their communities to the ground. Often I sit back and wonder what my great-grandmother was feeling as she was terrorized, jumping on the back of a pickup truck as armed white Tulsans told them they had to leave. The survivors of the massacre were forced into silence through fear-mongering and white supremacy tactics that persisted throughout the Jim Crow era—like public lynchings.

The scars of this devastation trace across Tulsa today — and we’re still dealing with the residual effects.

There’s been a continual massacre since and the culture hasn’t changed in Tulsa. The railroad tracks at Greenwood and Archer divided the white side of town from the Black side of town back in 1921. Today in 2020, it still symbolizes that racial divide.

That is part of why these past few weeks have been so triggering for me and my family. When we organized and gathered in Tulsa to protest the death of George Floyd, and to demand justice for my brother Terence and for other Black Tulsans killed by the police, we were met with police intimidation. And over the past few days, a Tulsa police major said that officers should be shooting more Black people based on the data. Police were caught on video arresting and pinning down Black children for jaywalking in their own neighborhood. The Tulsa mayor went on national TV and insinuated that my brother, who was unarmed with his hands in the air, was somehow responsible for his own death because of his drug addiction, and that race played no role.

So already being on high alert and retriggered, they announced President Trump would be delivering a speech right next door to a community that’s so important to Black people with an amazing civil rights backdrop. His campaign has spent days boasting of the hundreds of thousands of people that will be attending the Trump rally in Tulsa during the Juneteenth weekend, as we enter the centennial of the 1921 Tulsa Race Massacre.

We don’t feel that the President or the mayor of this city are qualified to tell our stories. So, we’re going to tell our own story.

We’re honoring our ancestors on our historic rally for freedom by truth-telling about how we were robbed of our generational wealth. How we were orphaned, beaten, killed. And we’re going to gather in defense of Black lives across this country. But we’re afraid of the crowd descending on our city in support of the President, who has upheld rather than rejected the tenants of white supremacy.

Juneteenth is a holiday when we remember that the emancipation was not easily won. And we’re gathering in the thousands—safely—in Greenwood to commemorate our ongoing struggle for emancipation. Because in reality, we’re still not free.

When I think about Juneteenth and what it represents, I think about the words of my twin brother, Terence, from the last conversation we had on our 40th birthday. He told me: “I’m going to overcome my struggles, I’m going to go back to school, and I’m going to make you proud. And God is going to get the glory out of my life”

This Juneteenth weekend is living proof of Terence’s last words.

I have witnessed the strength and love and resilience of our Black community. We’ve always drawn from the strength and resilience of our ancestors who rebuilt in the face of Jim Crow, slavery, segregation, mass incarceration. We have overcome every era of oppression. If they had to do it in blood, we have an opportunity to carry on that mantle for change and do it for our future generations. I stand by the quote of Ella Baker, when she says, “Those who believe in freedom cannot rest.”

I believe in this fight for freedom and the fact that people are locking arms and coming together to make it happen. I do believe that this is the turning point. And unfortunately, so many had to die. Breonna Taylor. Ahmaud Arbery. George Floyd. But those names are changing the world. 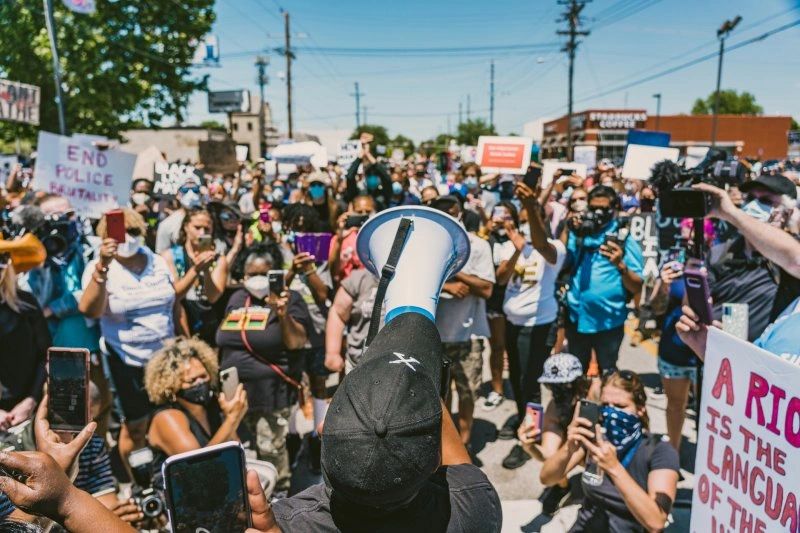 Tulsa activist Greg Robinson leads a protest in downtown Tulsa to protest racial in justice and police brutality in the wake of George Floyd's death.

State Question 805: A Battle Worth Fighting